Chelly is honored to be one of fifty-two contributing authors in this beautiful book of poignant vignettes compiled by Kim Richardson.

“The print edition not only has 52 stories of gratitude, but journaling space and a mandala coloring page for each week of the year… the perfect tool to practice gratitude!” ~ Shanda Trofe

Below is a sneak peak of Chelly’s chapter, Answered Prayer.

They say dog people have one “Soul Dog” who comes into their lives. We love ALL of our special fur babies, of course, but the Soul Dog is the one we have such an intense and personal bond with that our communication and emotional attachment to them is on a whole different level.

Humphrey was my Soul Dog, and the reasons I was so bonded with him go way deeper than just your typical dog-owner relationship.

When I was twenty-seven years old, I became pregnant. This was an unprecedented event since I never thought I would physically be able to have children. The doctors had warned me after an invasive surgery that my endometriosis had been so severe that pregnancy was unlikely. I was excited for the miracle of a little one growing inside me. And then one day, sadly and suddenly, I lost my baby, and he was never to see the world. I tried to stay positive, but I felt as though a part of me had died … which it had.

I couldn’t get over losing my Richard. I cried just about every night, and I mourned the baby whom I would never see, or touch, or tell “I love you.” I thought about him all the time, day and night. I couldn’t let go. My son would never know the love of his mother, and it tore up my soul so badly that I sometimes couldn’t breathe.

And then Mother’s Day came, and I was lying in bed thinking how I wasn’t a mother. Thinking that my baby was gone. Thinking that maybe it was something I did that made him go away. Thinking that I was such a horrible mama that I couldn’t even protect my own child enough to even be able to bring him into the world.

As all of these thoughts swirled through my mind, and the hurt became unbearable, I cried out, “God, I can’t take this anymore. I can’t deal with it. The pain isn’t going away! Please help me! Please.”

A couple of days later, I went into work at the veterinary clinic where I was employed. Midway through the afternoon, one of the technicians came into the back room holding a small black furry animal. It appeared to be a gerbil from what I could see, but our veterinarian took charge of the fuzzy handful and loudly declared it was a newborn puppy and someone needed to take it home. I jumped at the chance while everyone else backed away; I was the only one delighted about such a sleep-deprived prospect.

The doctor examined the tiny ball of soft black fluff and told me, “You are going to have to take really good care of him. Bottle-feed him every four hours and watch him constantly. He’s going to be like having a baby, okay?” She handed the warm bundle to me, having no idea of the impact of her next words. “He’s your baby now. He was born three days ago, which means he was born on Mother’s Day.”

That meant the puppy had come into this world on the day I had sent up my plea. In that moment, I knew God had answered my prayer.

Every four hours, I bottle fed little Humphrey, cradling his tiny, half-pound body in my palm. By the time he was a month old, he weighed five pounds – five pounds of fluffy love who slowly was healing my heart. I no longer had the deep sorrow I’d been carrying around. It seemed God saw fit to send an angel to me in the form of a dog. And as the years went by, that furry bit of love saw me through everything – many moves, a divorce, a lay-off, a bankruptcy, a broken heart, a tragic death – and he also was there for all of my good times, too, like finding love and peace and happiness again.

After twelve wonderful years together, Humphrey was diagnosed with kidney failure and I was told I had only a short time left with him. I cried into his fur and told him over and over I wasn’t ready for him to leave, that I still needed him in my life. My husband and I began at-home dialysis twice a day, and when Humphrey stopped eating, I syringe fed him Ensure and baby food every morning and every evening. It occurred to me, while I was sitting on the floor feeding him like a baby, that he and I had come full circle. As I looked into his milky, cataract-filled eyes, I realized that I was keeping him alive at the end just as I had at the beginning, and that he would always be my baby boy.

The day eventually came when I had to make the difficult decision – that inevitable, loving choice of setting my beloved dog free from pain. Letting Humphrey go was one of the most heart-wrenching moments of my life. He passed away peacefully in my arms while I whispered in his ear over and over, “I love you. I love you so much.”

The impact Humphrey had on my life was so special, and I think anyone who has a Soul Dog understands my journey. Humphrey healed me when I needed it most, and he was a gift beyond measure. Gratitude doesn’t adequately describe the joy and thankfulness I feel when I think of my fuzzy baby boy. And I know, in my heart of hearts, he and Richard are together in heaven; two guardian angels happily watching over their mama. 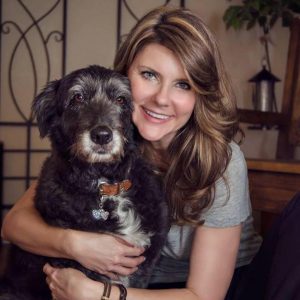 Namaste, my friends, and much love.